For nearly thirty years, a strange-looking whale skull has gathered dust in the collections of the Natural History Museum of Denmark. Now, a team of researchers has determined the reason for the skull's unique characteristics: it belongs to a narwhal-beluga hybrid. 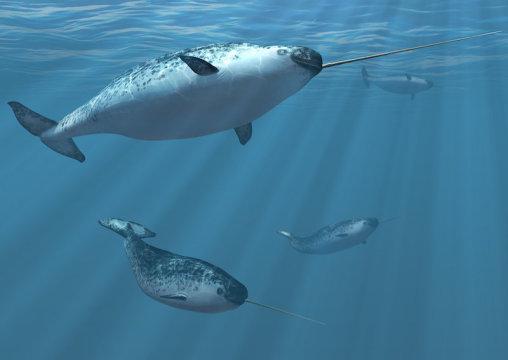 A Greenlandic hunter shot the whale in the 1980's and was puzzled by its odd appearance. He therefore kept the skull and placed it on the roof of his toolshed. Several years later, Professor Mads Peter Heide-Jørgensen of the Greenland Institute of Natural Resources visited the settlement and also immediately recognized the skull's strange characteristics. He interviewed the hunter about the anomalous whale he had shot, and sent the skull to Copenhagen. Since then, it has been stored at the Zoological Museum, a part of the Natural History Museum of Denmark.

"As far as we know, this is the first and only evidence in the world that these two Arctic whale species can interbreed. Based on the intermediate shape of the skull and teeth, it was suggested that the specimen might be a narwhal-beluga hybrid, but this could not be confirmed. Now we provide the data that confirm that yes -- it is indeed a hybrid," says Eline Lorenzen, evolutionary biologist and curator at the University of Copenhagen's Natural History Museum of Denmark. Lorenzen led the study, which was published today in Scientific Reports.

Using DNA and stable isotope analysis, the scientists determined that the skull belonged to a male, first-generation hybrid between a female narwhal and male beluga.

The hybrid's skull was considerably larger than that of a typical narwhal or beluga. But the teeth were markedly different. Whereas narwhals have only one or rarely two long spiraling tusks, belugas have a set of uniform conical teeth that are aligned in straight rows. The hybrid skull has a set of long, spiraling and pointed teeth, that are angled horizontally.

"This whale has a bizarre set of teeth. The isotope analysis allowed us to determine that the animal's diet was entirely different than that of a narwhal or beluga -- and it is possible that its teeth influenced its foraging strategy. Whereas the other two species fed in the water column, the hybrid was a bottom dweller," according to Mikkel Skovrind, a PhD student at the Natural History Museum and first author of the paper.

The researchers do not know what prompted the two species to mate, but it suggests a new phenomenon:

"We have analyzed the nuclear genomes of a narwhal and a beluga, but see no evidence of interbreeding for at least the past 1.25 million years of their evolutionary histories. So, interbreeding between the species appears to be either a very rare or a new occurrence. To my knowledge, it has not been observed or recorded before," says Eline Lorenzen.

Gems among the museum collections

Lorenzen points out that she and her colleagues used novel analytical methods that have only recently been developed.

"There are some true gems in the world's natural history collections that can provide us with key insights into the evolution and diversity of life on Earth. It is incredible when material -- such as this skull, which has been stored in our collection for decades -- can be revisited with new methodologies to gain novel biological insights" says Eline Lorenzen.

Mikkel Skovrind adds: "It would be interesting to find out if similar hybrid whales have been spotted elsewhere."