In a computer model of indoor environments, the researchers show that a range of volatile and semi-volatile gases and substances are produced when ozone, a form of oxygen that can be toxic, reacts with skin oils carried by soiled clothes, a reaction that some researchers have likened to the less-than-tidy Peanuts comic strip character. 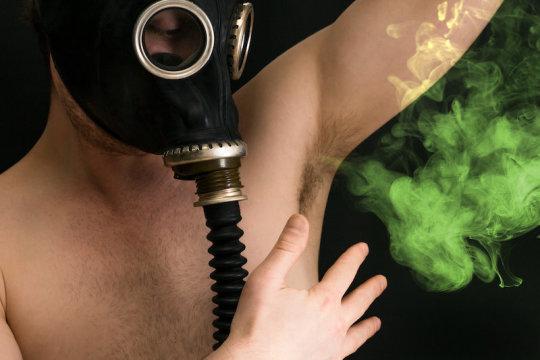 "When the ozone is depleted through human skin, we become the generator of the primary products, which can cause sensory irritations," said Donghyun Rim, assistant professor of architectural engineering and an Institute for CyberScience associate, Penn State. "Some people call this higher concentration of pollutants around the human body the personal cloud, or we call it the 'Pig-Pen Effect.'"

The substances that are produced by the reaction include organic compounds, such as carbonyls, that can irritate the skin and lungs, said Rim. People with asthma may be particularly vulnerable to ozone and ozone reaction products, he said.

According to the researchers, who reported their findings in a recent issue of Nature's Communications Chemistry, skin oils contain substances, such as squalene, fatty acids and wax esters. If a person wears the same clothes too long -- for example, more than a day -- without washing, there is a chance that the clothes become more saturated with the oils, leading to a higher chance of reaction with ozone, which is an unstable gas.

"Squalene can react very effectively with ozone," said Rim. "Squalene has a higher reaction rate with ozone because it has a double carbon bond and, because of its chemical makeup, the ozone wants to jump in and break this bond."

Indoors, ozone concentration can range from 5 to 25 parts per billion -- ppb -- depending on how the air is circulating from outside to inside and what types of chemicals and surfaces are used in the building. In a polluted city, for example, the amount of ozone in indoor environments may be much higher.

"A lot of people think of the ozone layer when we talk about ozone," said Rim. "But, we're not talking about that ozone, that's good ozone. But ozone at the ground level has adverse health impacts."

Wearing clean clothes might be a good idea for a lot of reasons, but it might not necessarily lead to reducing exposure to ozone, said Rim. For example, a single soiled t-shirt helps keep ozone out of the breathing zone by removing about 30 to 70 percent of the ozone circulating near a person.

"If you have clean clothes, that means you might be breathing in more of this ozone, which isn't good for you either," said Rim.

Rim said that the research is one part of a larger project to better understand the indoor environment where people spend most of their time.

"The bottom line is that we, humans, spend more than 90 percent of our time in buildings, or indoor environments, but, as far as actual research goes, there are still a lot of unknowns about what's going on and what types of gases and particles we're exposed to in indoor environments," said Rim. "The things that we inhale, that we touch, that we interact with, many of those things are contributing to the chemical accumulations in our body and our health."

Rather than advising people whether to wear clean or dirty clothes, the researchers suggest that people should focus on keeping ground ozone levels down. Better building design and filtration, along with cutting pollution, are ways that could cut the impact of the Pig-Pen Effect, they added.

The team relied on computer modeling to simulate indoor spaces that vary with ventilation conditions and how inhabitants of those spaces manage air quality, Rim said.

In the future, the team may look at how other common indoor sources, such as candle and cigarette smoke, could affect the indoor air quality and its impact on human health.