The first time Vayu Maini Rekdal manipulated microbes, he made a decent sourdough bread. At the time, young Maini Rekdal, and most people who head to the kitchen to whip up a salad dressing, pop popcorn, ferment vegetables, or caramelize onions, did not consider the crucial chemical reactions behind these concoctions.

Even more crucial are the reactions that happen after the plates are clean. When a slice of sourdough travels through the digestive system, the trillions of microbes that live in our gut help the body break down that bread to absorb the nutrients. Since the human body cannot digest certain substances -- all-important fiber, for example -- microbes step up to perform chemistry no human can. 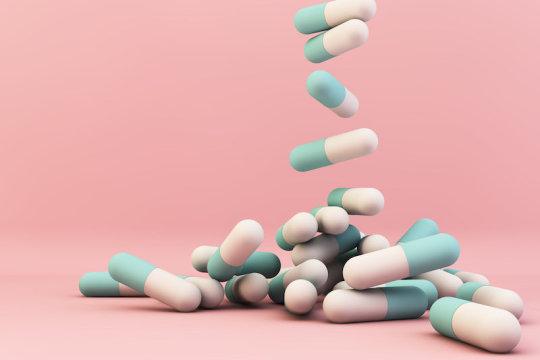 "But this kind of microbial metabolism can also be detrimental," said Maini Rekdal, a graduate student in the lab of Professor Emily Balskus and first-author on their new study published in Science. According to Maini Rekdal, gut microbes can chew up medications, too, often with hazardous side effects. "Maybe the drug is not going to reach its target in the body, maybe it's going to be toxic all of a sudden, maybe it's going to be less helpful," Maini Rekdal said.

In their study, Balskus, Maini Rekdal, and their collaborators at the University of California San Francisco, describe one of the first concrete examples of how the microbiome can interfere with a drug's intended path through the body. Focusing on levodopa (L-dopa), the primary treatment for Parkinson's disease, they identified which bacteria are responsible for degrading the drug and how to stop this microbial interference.

Parkinson's disease attacks nerve cells in the brain that produce dopamine, without which the body can suffer tremors, muscle rigidity, and problems with balance and coordination. L-dopa delivers dopamine to the brain to relieve symptoms. But only about 1 to 5% of the drug actually reaches the brain.

This number -- and the drug's efficacy -- varies widely from patient to patient. Since the introduction of L-dopa in the late 1960s, researchers have known that the body's enzymes (tools that perform necessary chemistry) can break down L-dopa in the gut, preventing the drug from reaching the brain. So, the pharmaceutical industry introduced a new drug, carbidopa, to block unwanted L-dopa metabolism. Taken together, the treatment seemed to work.

"Even so," Maini Rekdal said, "there's a lot of metabolism that's unexplained, and it's very variable between people." That variance is a problem: Not only is the drug less effective for some patients, but when L-dopa is transformed into dopamine outside the brain, the compound can cause side effects, including severe gastrointestinal distress and cardiac arrhythmias. If less of the drug reaches the brain, patients are often given more to manage their symptoms, potentially exacerbating these side effects.

Maini Rekdal suspected microbes might be behind the L-dopa disappearance. Since previous research showed that antibiotics improve a patient's response to L-dopa, scientists speculated that bacteria might be to blame. Still, no one identified which bacterial species might be culpable or how and why they eat the drug.

So, the Balskus team launched an investigation. The unusual chemistry -- L-dopa to dopamine -- was their first clue.

Few bacterial enzymes can perform this conversion. But, a good number bind to tyrosine -- an amino acid similar to L-dopa. And one, from a food microbe often found in milk and pickles (Lactobacillus brevis), can accept both tyrosine and L-dopa.

Using the Human Microbiome Project as a reference, Maini Rekdal and his team hunted through bacterial DNA to identify which gut microbes had genes to encode a similar enzyme. Several fit their criteria; but only one strain, Enterococcus faecalis (E. faecalis), ate all the L-dopa, every time.

With this discovery, the team provided the first strong evidence connecting E. faecalis and the bacteria's enzyme (PLP-dependent tyrosine decarboxylase or TyrDC) to L-dopa metabolism.

And yet, a human enzyme can and does convert L-dopa to dopamine in the gut, the same reaction carbidopa is designed to stop. Then why, the team wondered, does the E. faecalis enzyme escape carbidopa's reach?

Even though the human and bacterial enzymes perform the exact same chemical reaction, the bacterial one looks just a little different. Maini Rekdal speculated that carbidopa may not be able to penetrate the microbial cells or the slight structural variance could prevent the drug from interacting with the bacterial enzyme. If true, other host-targeted treatments may be just as ineffective as carbidopa against similar microbial machinations.

But the cause may not matter. Balskus and her team already discovered a molecule capable of inhibiting the bacterial enzyme.

"The molecule turns off this unwanted bacterial metabolism without killing the bacteria; it's just targeting a non-essential enzyme," Maini Rekdal said. This and similar compounds could provide a starting place for the development of new drugs to improve L-dopa therapy for Parkinson's patients.

The team might have stopped there. But instead, they pushed further to unravel a second step in the microbial metabolism of L-dopa. After E. faecalis converts the drug into dopamine, a second organism converts dopamine into another compound, meta-tyramine.

To find this second organism, Maini Rekdal left behind his mother dough's microbial masses to experiment with a fecal sample. He subjected its diverse microbial community to a Darwinian game, feeding dopamine to hordes of microbes to see which prospered.

Eggerthella lenta won. These bacteria consume dopamine, producing meta-tyramine as a by-product. This kind of reaction is challenging, even for chemists. "There's no way to do it on the bench top," Maini Rekdal said, "and previously no enzymes were known that did this exact reaction."

The meta-tyramine by-product may contribute to some of the noxious L-dopa side effects; more research needs to be done. But, apart from the implications for Parkinson's patients, E. lenta's novel chemistry raises more questions: Why would bacteria adapt to use dopamine, which is typically associated with the brain? What else can gut microbes do? And does this chemistry impact our health?

"All of this suggests that gut microbes may contribute to the dramatic variability that is observed in side effects and efficacy between different patients taking L-dopa," Balskus said.

But this microbial interference may not be limited to L-dopa and Parkinson's disease. Their study could shepherd additional work to discover exactly who is in our gut, what they can do, and how they can impact our health, for better or worse.

University of Tokyo graduate student Yuuki Wada with colleagues from Japan have discovered a connection between lightning strikes and two kinds of gamma-ray phenomena in thunderclouds. The research suggests that in certain conditions, weak gamma-ray glows from thunderclouds may precede lightning bolts and their accompanying gamma-ray flashes.